All Thing Are Possible 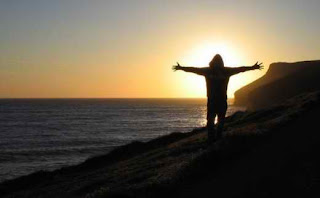 So how to start the week off in a great way?  How about with a plan that feeds mind, body, spirit and dreams...something I learned in church this weekend.

Affirmation:  I believe that life is for me

All that God/Universe has to offer is available to you.  The challenge is getting past our limiting sensabilities.    What we need to do is to start each day with:

1. Acceptance - The answer to all my problems today (accept things for what they are and keep it moving)
2. Responsibility - Blaming no one (including myself) for what is occuring - Life happens!

3. Defenselessness -  Lean into everything with a spirit of love and your defenses automatically dissipate.

Here is your opportunity to manifest what you want or need in your life.

Meditate, Manifest and Grow on...

Who/What makes up your community?  Family, friends, coworkers, regular strangers on your bus route, your cyberworld, or maybe your four legged or dare I say no legged creature named_____...Do your individual/collective commmunities emotionally, spiritually, physically feed you?   In a time of crisis, how would your community respond?  Over the last few weeks, i've experienced the loss of a loved one in two different communities.

The first, was the accidental death of a young fourteen year old boy who was so close to my nephew that they really saw each other as brothers, so needless to say this was a devastating blow.  What made it even more tragic was how Noah's life was taken away.  A good friend of his accidentally shot him as they played with this kid's grandfather's gun.  So now instead of having lost one 14 year old life, another 14 year old life was/is changed forever.  Unfathomable trauma and pain.  Something I couldn't or wouldn't wish on my very worst enemy.  I prayed hard for both of these families.  I didn't want to wrap my heart or head around getting through it all.  How would these families survive this tragedy?

Less then 24 hours after Noah's death, his mother took to face book to write about her son, share her sadness, thank the people who were being supportive and the most powerful line in her post was...(friend's name here), I forgive you...I know it was an accident.  Please talk to me...I forgive you. This extended olive branch opened the doors of community to not only support Noah's family, but support the friend who was left to live with this accident.  Community embraced this boy and protected him from any outside attacks, critcism or scrutiny.  People in the community have also vowed to support this child by showing up to his hearing(s).  Powerful...

The second, not because it was less important but because both of these tradegies just happened so close to each other and in this order, was my friend Sally.  Ovarian Cancer was what stole her life from us at the tender age of 39.  Sally battled this evil disease for around 4 years of her life.  Sally grew up in Michigan with a challenging past that she worked as hard as she could to leave that world behind.  She came to Chicago and worked hard to become a successful producer at a worldwide Ad Agency.  This career afforded her the opportunity to travel the world and see and experience life in a way that very few in this world will ever get to do. She was a coworker of mine for over six years.

I was a part of Sally's work community and later became a part of her girlfriend community which consisted of a variety of women whom, over the last few her life did their best to provide emotional, spiritual and physical nourishment for her and her family.  Over the last few years I watched these girlfriends collaborate on fundraisers and cleaning services and visiting schedules and food and shopping and so forth and so on.  Sally's husband has/had even made strong connections with some of these ladies allowing them into his pain which I believe might be helping him cope.  Sally's mother also has/had leaned on the girlfriends for support.  I believe he girlfriends gave her insight on her daughter that Sally might have only shared with her closests girls.  Sally's girlfriend community was strong and supportive, which I believe represented her character.

This brings me to the point of this blog entry.  If tragedy ever struck, have I built enough of a community that would/could support me or mine through it all?  What would that suppport look and feel like?  Am I creating enough Sat Karma ( the positive karma that one earns through words and deeds) to ensure the community support that I might need?   Over the years, I have needed to lean on family, friends and even work to get me through some of lifes traumas or challenges.  I've been blessed to be able to pick up the phone and easily find a shoulder to cry on or even a roof over my head if things got that bad.  I'm blessed.


The other part is the community that is made up of people that I don't know, but because of who I am associated with, they step in.  I watched that happen over and over again with Noah & Sally.  People who didn't know them personally, but knew of them wanted to attach themselves to thier communities. They wanted to help.  They wanted to contribute to their legacy.


What are you doing to ensure that your full circle is made up of a community of people who are proud to be associated with you.  Would your community be proud to contribute to your legacy?